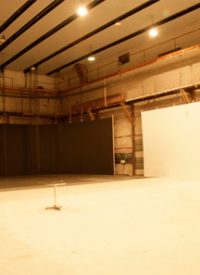 In the aftermath of WW II Artur Brauner ended up in Berlin. In 1946 he received an American license to establish the Central Cinema Company. In 1949 he began to built a first soundstage on a 3.500 m² area in Berlin Spandau, which formerly served as a laboratory facility for poisoning agents.

First filming started in two 400 – 500 m² soundstages. In 1954, in the wake of the “Wirtschaftswunder” (German economic miracle), Artur Brauner dared the investment of two more new soundstages (658,83 m² und 1309 m²), which were designed and built by the architects Karl Schneider and Lothar Wloch.

In the next year two more stages were built (306 und 680 m²). The studio is now integrated completely to a cost-effective and economic operating system and is one of the most modern studios in West-Berlin and the German Federal Republic.

“The so-called “modular principal use” was constructed when planning the Studio Complex. This is to be understood by lining up several middle groups of studios, whereby an optical connection between the individual groups can be made. This arrangement has the advantage that combining two middle groups (stages) one large studio can be created. (…) In relation to the new widescreen formats such as CinemaScope, the dimensions of the studios had to be changed over to a broader or squarer design, since the widescreen demand particularly required broader decorations. Three groups of studios were built together, whereby studio 3 and 4 were separated from a narrow intermediate area. Broad gates permit an optical connection of both studios. Thus resulting in a total depth of 80 meters.” (Kino-Technik, Nr. 6, 1955; zit. in Filmpress, Nr. 25, 21.6.1956).

In 1979/89 the studios were all converted soundproof, due to the heavy air traffic from nearby Tegel Airport. The West-Berliner Theaters also used them more frequently for rehearsals. At the height of his career Peter Stein produced his in sheer dimensions huge “Shakespeare-Project”. Until today close to 700 features films were produced in the Studio Complex. From Fritz Langs colorful Indian remake of his own scripts DAS INDISCHE GRABMAL (1958/59) to Harald Reinls two-part feature DIE NIBELUNGEN (1966/67) up to Rainer Werner Fassbinders QUERELLE (1982) and OTTO-The Film (1985).

Since mid-2015, Alice Brauner has been responsible for the restoration of the CCC film studios in Haselhorst.Right after that, she was able to land her first coup: The entire studio portion of the first German Netflix series DARK was shot entirely at CCC Filmstudios in 2017.In addition, the entire studio portion of the successful mini-series KU’DAMM 59, 63 and 66 (producer Ufa) was shot at the studios too.In August 2018,  ALLES ODER NICHTS, the new Sat.1 daily-show began filming at the CCC Filmstudios. This was followed by other streamer series such as QUEEN’S GAMBIT (2019/20) or ALMOST FLY (2021).

Since April 2022, the dystopian Sky series HELGOLAND 513 (producer: Ufa), among others, is being created at the CCC film studios under the direction of the Hollywood-great Robert Schwentke.